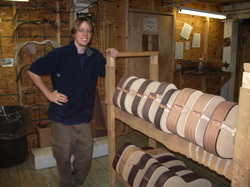 Drew in the shop at Bourgeois Guitars.
T. Drew Heinonen is currently operating as a solo builder. He recently completed two years working in the shop of Jim Olson in Circle Pines, MN. In 2011, Drew met Jim at a Jig, Fixture & Tooling seminar held at the North House Folk School in Grand Marais, MN. The two sparked a friendship, and several months later Jim invited Drew to work in his shop through his next build cycle. Drew spent two model years, 2012 and 2013, working with him on all aspects of the build process- from layout through to the final set up of strings. During those two seasons, they produced over 80 guitars. Previous to his time at Olson Guitars, Drew spent nearly four and a half years working in the shop of Dana Bourgeois in Lewiston, ME. At Bourgeois Guitars, Drew worked as a Binding & Body specialist where he was involved in the binding process, neck construction, setting necks to the bodies, jig and fixture development, surface preparation, as well as the final voicing of the guitar bodies before they entered the finish department. He had a hand in the construction of approximately 1500 instruments that came out of Bourgeois Guitars before his return to Minnesota.

T. Drew Heinonen's journey as a guitar builder began as a senior in college with a course entitled "The Physics of Sound," a lab based study including a wide range of acoustic properities- sound wave propagation, harmonic and overtone relationships and structure, vibrational patterns of plates, strings, and air, instrument and vocal functionality- and culminating in a final project analyzing the resonant frequencies and responsiveness of his own guitar. After completing a Bachelor's degree in Religion & Philosophy, he enrolled in the Guitar Repair & Building program at Southeast Tech in Red Wing, MN. While a student in Red Wing, Drew met Dana Bourgeois at a voicing seminar and upon graduation was invited to work in the Bourgeois shop in Maine.

Currently, Drew is accepting custom orders with an approximate wait of 12 months (subject to change). Please contact Drew directly to reserve your position on his build list today. 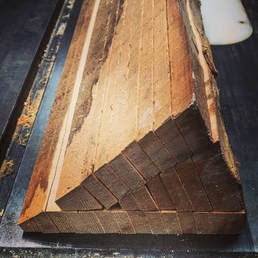